I'm stuck on a stranded island, with nothing but a few coins,  a nail cutter, clothes on my back and a Hatchet..

I am reading HATCHET. An inspiring adventure by Gary Paulsen. When I read the first book, I loved it from the start to the end. It teaches how to survive in the wilderness, like building a shelter and creating fire! Or  how to build a bow and arrow to catch fish and even how to cook! The boy -Brian- peserveres to survive, and what he has been through is just unbelievable. A few parts are a bit shattering with the weather conditions and injures. The Author is very good at describing of how the characters are feeling and what the scenes look like, its as if we are looking right at it. Ever since I started reading the first book, I began reading the 2nd book-The Return. It just became more exciting when I started reading the 3rd book- Winter. I'm looking forward to reading other books written from Gary Paulsen.

"Heart-stopping ...somewhere beyond adventure"-Publishers Weekly
"SURVIVAL AGAINST ALL ODDS."

I think that everyone will enjoy this book. HATCHET
Book review by Louise
Posted by room7thinkers at 01:25 1 comments

Monsters sniffing your scent so they can find you and kill you.Greek gods trying to kill you just because you were born.This is Percy Jackson's daily life.Percy Jackson was just a 12 year old until he discovered he was a half blood.

This book is about Percy Jackson going to Camp Half Blood here he learns about his awesome abilities and the truth about his life. His father is Poseidon a powerful sea god, which makes Percy one of the most powerful half blood but that also means that Poseidon broke an oath that he made on the river Styx and making an oath there is really powerful.At camp he gets sent on a quest with his best friends Grover and Annabeth to stop a war because Zeus thought that Poseidon stole his master bolt and Percy and his friends have to stop the war from starting before the summer solstice which is in 1 week.On the way he gets on lots of detours

I like this book because of it's twists and turns and how the author has put lots of creativity, action and humor into it. The book is on the New York times children's Best Seller list, on Young Adult Library Services Association's Best Books for Young Adult and on other awards.This book is suitable for ages 9-11


Book review by Kyla Canares
Posted by room7thinkers at 20:56 0 comments

Harry Potter and the Chamber of Secrets

Harry Potter is a wizard. He is in his second year at Hogwarts School of Witchcraft and Wizardry. Little does he know that this year will be just as eventful as the last...

I am reading Harry Potter and the Chamber of Secrets, and I am really enjoying it. It is better than watching the movie because it contains more deatail and answers to funny things happening in the wizarding world. Since movies have a limited time duration, they have to cut out some bits, so you sometimes miss out on the good bits. If you have already wathched the movie, then you can picture the scenes in your head as you read. In  the movie, sometimes you don't notice certain things, and then later on in the movie you don't know what is going on, but in the book it points those things out, so you are not sitting there reading and not knowing what is going on.

'Joanne Rowling's second book is just as funny, frightening and unexpected as her first.'- The Daily Mail

'Harry Potter and the Chamber of Secrets is as good as it's predecessor... Hogwarts is a creation of genius.' The Times Literary Supplement

These are just a couple of the many complements this book has gotten. It is also the winner of  the smarties book prize 1998 gold award 9-11 age Category. I believe that everyone who is cable of reading it should do so. As they say, 'Hogwarts is a creation of genius.'

Book Report By Zanobia
Posted by room7thinkers at 21:30 0 comments

Matter is anything that takes up space, such as air, a pencil, or a cement truck. It doesn't matter how much space it takes up, or how it takes up the space.

The particles, atoms or molecules in solids are very close together and do not move around very much. Solids have a definite shape and volume, which does not change.

The particles in liquid aren't very close to each other, and are free to move around. Liquid cannot take shape by itself, you need to put it in something to prevent it from flowing away.

The particles in gas are not linked together at all. They shoot out everywhere and fill all the space they are in. Gas has no definite shape or volume.
One example that contains all three states is simple water. At room tempreture it is water, at below 0 °C It freezes into ice, a solid, and when you boil water it turns into water vapour, a gas.

Matter is anything and everything

By Zanobia
Posted by room7thinkers at 21:08 0 comments

Today Miss. Rack took us to the library."Choose the interesting books that you will read over the holidays"Said Miss. Rack.So I chose a book by Dick-king smith,I thought he was a good auther.And the book is called"Sophies adventures.The second book was a classic,so that means it was writen ages ago.I like it when its a classic because it is written very carefully and has all the jucy parts in it.It is called "Black Beauty" retold from anna sewell original.My last book is called"Anne of green gables" retold from the lucy maud montgomery original.They get me hooked into read,especialy the classics.I'd recommend it to people that love old styles and classic things and sophies adventures would be good for people that start to read thick books.The blub of Sophies adventers (In my words):Sophie is small but very determined she loves nature and animals,she wants to be a farmer when she grows up.The Blurb of Black Beauty (In my words):Black beauty has lived his whole life on a nice quiet farm,but when his masters wife gets sick,Beautys life takes a bad corner for the worse,Thrust and cruelty.Beauty must try his best to survive until he can find his way back to love and kindness he once knew.And last but not least the last classic Anne of green gables,From the first time she saw green gables,anne shirley knew she had finally found a place to call home.She experiences the life time of pain and joy of becoming part of a family and growing up in the remote Canadian villige of Avonlea.So next time you read one of these books,Enjoy them!
Posted by room7thinkers at 01:58 0 comments

Email ThisBlogThis!Share to TwitterShare to FacebookShare to Pinterest
Labels: Isabella

Science - What happens when milk and soap come together.

First you put milk and food colouring in a bowl. When you add soap all you see is a crazy collision of colours. But do you really know whats going on underneath?
When milk, food colouring and soap are combined the soap chases the fat molecules in the milk. This causes the food colouring to gat pushed and prodded which make the pretty colours that you see on top. Once all the tiny particles of soap have there own fat molecule the soap, fat molecules, proteins, natural sugars (from the milk), and food colouring will stop moving.
If you put more soap in this whole process will start all over again. Therefore the food colouring fireworks occur. So next time you do an experiment, try not to think you can see all that's going on.
Posted by room7thinkers at 14:40 0 comments

Email ThisBlogThis!Share to TwitterShare to FacebookShare to Pinterest
Labels: Grace 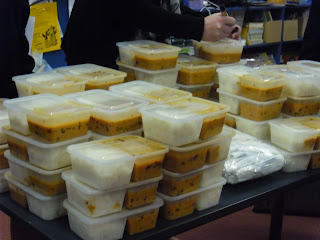 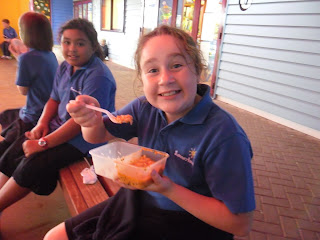 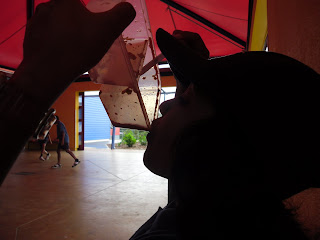 Zanobia and Alexia have been working on raising money for Christchurch. We have been making progress in the last few weeks.Our task is to make Butter Ckicken lunch for friday. We made posters and gave one to each pod to advertise. It was hard work telling almost all the classes about what we were doing. Then we realized that we had to make order forms, and it was at the last minute that we had to cut out 358 order forms which we did in about 10 mins, we were really fast! On Wednesday, week 8, we took orders from people who wanted a box, and on Thursday the money and orders started rushing in like it was the last box left. At any random time of the day, someone would come up to us and give us their form and their money Although some people forgot their money,  we still raised quite alot of money. Next came the hardest bit of the whole task; Making 120 boxes of Butter Chicken. I helped mum, but at 9:00 o'clock, It was time for me to go to bed. Mum stayed up till 2:00 o'clock in the morning making the rest of the Butter Chicken. i felt sorry for her since she had to go to work at 6:45 in the morning.It was an amazing feeling when we gave the delivery and came back to class. Taking a step into the classroom was like taking a step to heaven. Not that we didn't want to do it and we were finally finished, but the fact that we had just finished a task not that many people could have done in 1 week.
Posted by room7thinkers at 03:24 2 comments